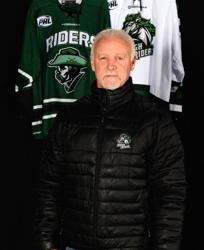 Coach Smail is a native Canadian and has spent 16 years as a player in professional hockey, 13 of which were spent in the NHL, and 3 years in European leagues.  Coincidentally, he taught at hockey schools across western Canada from the time he was 19 years old.

Doug Smail played Junior hockey with the Moose Jaw Canucks in the SJHL.  Following his Junior hockey career, Mr. Smail was offered scholarship opportunities with several Universities.  He decided on the University of North Dakota where played for 3 seasons.  He left in 1980 after winning a National Championship.

Throughout his career Doug Smail has been involved in Hockey Schools concerning on ice instruction, drill and system organization as well as complete youth hockey program development.

The Coaching / Management style of Mr. Smail has been established to include experience, relational understanding, organizational and managerial skills and personal playing and coaching experience.  He establishes a "Blueprint" for the teams he is involved with. This blueprint involves the athletic necessities of:

Teams will share the common goal of developing a culture with complete honesty and integrity in their work ethic which will support the performance of the team as a whole.  An overall classic style of coaching / management for optimum efficiency, education and growth is implemented with the constant promotion of a disciplined environment to improve the character and skill of the youth athlete.   Personality, family and physical characteristics are evaluated.  This allows Mr. Smail the ability to use a hands on approach to each and every athlete in an effort to best utilize each player's personality characteristics in combination with their skill set to draw them into the environment of achieving their highest goals both on the ice and in everyday life.