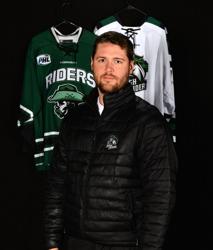 Timm Lorenz, a native of Colorado, has over 15 years of coaching experience specializing in the development of goaltenders. He currently holds the positions of Goaltending Coach for the Rocky Mountain RoughRiders, Director of Goaltending Development for Boulder Hockey Club, and President/Owner of In The Crease, Inc.(www.ITCgoaltending.com). His coaching career includes many other coaching experiences such as working with the University of Denver Pioneers (WCHA), GDI Regional and National camps, Director of Goaltending for Arvada Hockey Association, CAHA State Evaluations, USA Hockey National Development Camps, and many other Junior A, Midget AAA and youth teams around the country.

Timm had an 18 year playing career, which included youth hockey at Arvada Hockey Association, high school hockey at Bloomington-Jefferson in Minnesota, Junior A in the Eastern Junior Hockey League, and college hockey at St. John’s University.

After completing one season at St. John's University, Timm transferred to the University of Denver where he earned a B.S.B.A. in Sports Management.